On September 2, 2010 my wife and I celebrated ten years of marriage, so we decided to take a mini-vacation over Labor Day weekend to Saugatuk.

On Saturday, the dogs were kenneled at the Woodland Hospital for Animals. We hadn’t used that kennel before, but it turned out to be clean and roomy. Tara and Duncan got to share a cell which had an indoor and outdoor section.

On Sunday, we drove up to Grandma and Grandpa Shamus’s house so George could stay the night. It was his first sleepover without us, so it was a big deal for him. To prepare him for it, we got him a Buzz Lightyear sleeping bag and had him try it out by sleeping on the floor one night. He normally sleeps in a crib, so it was amazing that he slept all night and didn’t get up. He also slept well at Grandma and Grandpa’s house after they wore him out with a boat ride, a sandbox, a ten foot long puzzle and who knows what else. I know he had a good time.

After dropping off George, we took off for Saugatuck. We took a wrong turn and ended up driving back-roads much of the way there. It was actually nice to go slower and take in the countryside on the north side of the Grand River.

Lori has a friend whose mother owns Saugatuck’s Victorian Inn, so she set us up there for the night. It’s a well-kept house with several large rooms for guests. The antique decor is plentiful without being too cluttered. Although I thought the bed was too stiff and the pillows were too flat, Lori loved it all. Everyone was friendly, and the location just at the edge of downtown was perfect. We really enjoyed our stay there. After a quick tour of our sitting room, master suite (with jacuzzi!), and private bathroom, we hit the streets of Saugatuck.

We grabbed lunch at a corner restaurant called Pumpernickles. I had a yummy perch sandwich and an Oberon while we watched people walk by the patio. It was very busy and all of the streets were parked up. There weren’t any parking tolls, so people had to drive in circles until they found a spot into which they could squeeze their car.

After lunch we wandered the downtown shopping district. It’s not nearly as big as I thought it would be, and we covered the whole thing in about an hour. Then we went back to some of the more interesting stores for a closer look.

First we went into a food and kitchen shop. There were some interesting utensils, but most things were priced too high. I enjoyed their selection of a half dozen samples of various cherry salsas and apple spreads, most of which were from Michigan.

Next we stopped at a spice store to take in the aroma. I probably looked strange walking around sniffing deeply, but it smelled so exotic and spicy that I couldn’t help myself. I think I embarrassed Lori a bit with my enthusiasm for the samples in the previous store and the smells in this one, but, doggone it, I like to sample the local foods when I’m on vacation.

The next stop I remember was an art and sculpture shop called GoodGoods. It had a lot of interesting wood carved and painted leather furniture, and a huge selection of animals made from scrap metal. There was also a little garden with intricately crafted animal benches. If you can’t tell from all the links, I really enjoyed this shop. 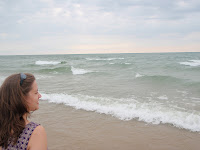 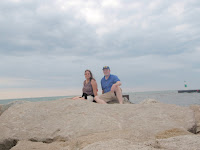 It was a nice afternoon, so we decided to hit the beach on Lake Michigan. Despite being about a half mile as the crow flies, it’s a long drive to get to Oval Beach from downtown Saugatuck. We got to see a lot of nice houses along the way, and wound up some crazy steep hills. The beach was very nice. The sand was a little grittier than Muskegon and Holland, and there were more pebbles in the lake. We walked to the Kalamazoo River outlet and hung out on the rocks for a while and then made our way to the other end of the beach where we rested and listened to the waves and wind.

We went back to town at about 7:30 and thought we’d hit some of the wine tasting shops and a restaurant. However we were sorely disappointed when we discovered that all of the wine shops had closed at about 6PM. Bummer.

We decided to dine at Toulouse, a French restaurant downtown. It was very nice inside, and the food was good. I had some sort of peasant casserole with sausage, Cornish game hen, and chicken. The best part of my meal was the Absinthe. It had been banned as a psychotropic drug for a long time, so it was fun to be able to try it out. It emitted some good-smelling visible vapor and tasted like liquefied black licorice. Awesome! We followed that up with some delicious fondue.

In the morning, we had a nice peach French toast for breakfast at the Inn, and checked out. We then wandered the streets for one last time and made a circuit of all the yachts parked around the lake. I swear some of them had more floorspace than our house. We then started on our way back to pick up George.

We still wanted some wine tasting, so we headed up towards Holland. Nothing was open in the morning, so that turned out to be a bust. We then decided to head back south and check out Crane’s Orchard and the Fenn Valley Winery in Fennville. This turned out to be an excellent idea. Crane’s had really good donuts and hot cider, which we ate outside.We also picked up a frozen blueberry pie and an apple crisp for later. Fenn Valley was open for wine tasting, so we went in and tried a few of their offerings. We came home with two bottles of Lakshore Ruby Red, one bottle of Classic Port, and one bottle of 42 Ice Wine – so named because it is made from grapes frozen on the vine. I think we’ll visit these places again next time we’re headed south.

Since we were celebrating our 10th anniversary, I tried to remember where we used to eat regularly ten years ago. We couldn’t find a Blimpie Subs, so we stopped for lunch at Village Inn Pizza in Holland. They served me one of the best toasted subs I’ve ever had. It was a Philly Beef and Cheese with sautÃ©ed onions, green peppers, and mushrooms and chipotle mayo.  It made a wonderful end to our mini-vacation.

So I think the whole thing turned out rather well. We got to visit interesting places, relax on the beach, eat good food, drink good wine, and George had fun at Grandma and Grandpa’s. I hope we can do it again soon.

This entry was posted in personal. Bookmark the permalink.